This project is the result of interventions in public space, conducted between October 24–28 in Budapest. The interventions were planned by Gesa Friederike Kuis and Willem Rabe.

The city of Budapest has a certain way to present itself to the public, regarding its media appearance but also within its urban development plan. An image is painted that emphasizes certain aspects and neglects others. This in itself is not unusual, self-staging is common practice for every tourist-oriented city or region. What makes Budapest special is the historical dimension and the radical breaches expressed through its architecture. Something is happening here: Entire districts are being transformed within a few years. Because it’s an elusive process it’s hard to capture. Our goal was to find architectural evidence of progress within the abandoned, neglected parts of the city. Structures in brick and concrete that serve as monuments for a different Budapest than your everyday postcard panorama. We further strived to point those places out as monuments, using the hungarian term »műemlék« which is the commonly used term on landmarks throughout the city.

Our process started with a piece of typography we discovered on a public monument near the castle on the Buda side. It is a characteristic type used by chiselers, it’s strong lines make it easy to reproduce it from various materials. Since the original type was set in latin we had to expand it to be suitable for hungarian type. With the type done we conducted four interventions.

The first intervention is based on the thesis that monuments encapsulate the city’s soul and can be made visible by removing the layers of dirt that have accumulated on them over time. We chose to use the nonintrusive way of »reverse grafitti« to accomplish this: By cleaning particular areas of a dirty area a contrast is created. This is similar to using your finger on a dirty window to write a message. We found an abandoned facility that might have been a factory or parking garage at some point and is one of a few buildings left in an area that once had been tilled entirely. We found this to be the perfect place for an intervention since it had outlasted time due to its immense size. The biggest challenge was to find a wall that had not been used as a canvas for graffiti artists. We bypassed that problem by using the largest surface in the entire complex that also had no trace of color on it: The floor. Using stencils we drew pencil outlines on the ground and used sponges and spattles to attentively clean the letter’s shapes. The lettering became visible through the water we used and eventually faded away as the water evaporated. However, the cleaned letter shapes remained distinctively visible.

The absence of both untouched and dirty wall space motivated us to look for alternative ways to put our type into place. We came up with the idea to create the word from the very same material that previously had been our canvas: concrete. We cut the letter‘s shapes into a two inch thick sheet of styrofoam and effused them with quick-drying concrete. To save material and stay mobile we only used 6.5 pounds of concrete to create the 8x8” letters, about 30 pounds would have been necessary to create solid letters that would stand by themselves. An abandoned courtyard in the sixth district formed the stage for this intervention. We used the only hour of continuous sunlight during the entire week to create a dramatic light situation. This got us some attention by a few homeless people that had been sleeping in a nearby basement. However, as they noticed that we wouldn’t be
rivals for their shelter they wished us a good day and went back to their hideout.

Our 3rd intervention’s theme was the monument’s decay. A concrete window sill within an abandoned strip mall was our frame as we used loose bricks to shape our keyword once more. We then set up a camera to capture its destruction.

After failing to find both dirty and untouched walls during the first intervention we stumbled upon the ideal canvas after all: A burnt out storefront. Its walls were covered with white tiles that were now coated with an even layer of smut – The perfect spot for reverse typography! Within a few minutes we were able to leave various interpretations of our keyword in this modern monument. 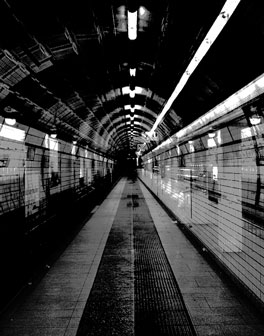