On the occasion of the seventieth anniversary of VE day, »Friends Moscow« and Google Russia created the biggest Russian online archive of frontline letters from World War II.
I was approached by »Friends Moscow« to create the centrepiece of the archive – A typographic illustration made up of roughly 800 individual terms that would serve as the central interface to access the letters.

Turning what had been static typeface illustrations into a fully immersive interactive experience was an exciting challenge to me as it required both artistic and technical finesse to yield the results we were aiming for.

The first step was for us to create a photographic template that would fulfill the following requirements:

The photo shoot was done in Moscow. After receiving the photographic data I went to work, first locally adjusting the contrast of the photograph, then creating an intricate line drawing featuring every countour, crease, strand of hair and fold within the image. I found the typeface DIN to be suitable for the job as its Cyrillic alphabet has very even proportions and it doesn’t run too wide. With the prioritized list of all the client approved terms on hand I began typesetting, using the aforementioned scaffolding of lines to guide me. The process took a hefty hundred hours and involved a lot of manual labour as every letter of every term had to be sized, spaced and in some instances rotated to afford the most even overall appearance. After completing the process and following a strict protocol all the outlines were converted into a machine readable format and fed into the content management system that powers the interactive archive. This allowed us to later assign terms to letters that would match contextually. 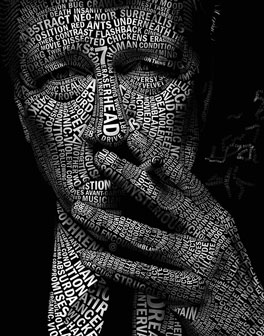 typeface is an ongoing series of typographic portraits featuring icons of popular culture.